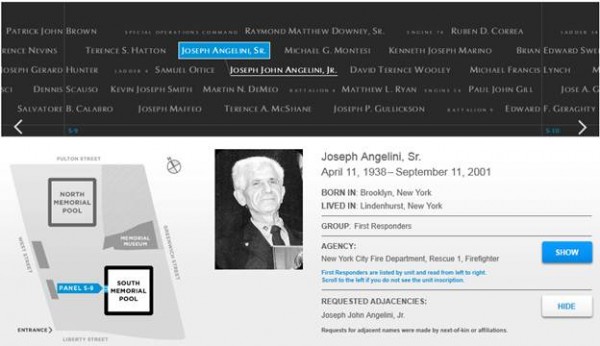 The National September 11 Memorial opened today on the tenth anniversary of the attacks, expressing our grief and our memories of that horrible day.  As in all memorials with names, the arrangement forms our perception of those who died.

Gathering similar concepts together is the goal of information arrangement, the one exception being random, a strategy that specifically lacks meaning.  So I was appalled when random was chosen in 2004 as the organizing structure for the World Trade Center memorial.  In what became the beginning of research into memorial name arrangement, I wrote to the commission suggesting location as a better organizing strategy and posted blogs complaining about random.

I was not alone.  The families of those who died understood that random placed their friends and loved ones into a miscellaneous scattering of nearly 3,000 names.  Unlike the Vietnam Veterans Memorial, where chronology allows a soldier to see the names of his fallen friends in one place among the panels, random would make every visit a search exercise.  Families protested loudly but the commission refused to budge.  The impasse went on for years, ending only when these wealthy families threatened to withdraw their monetary contributions.  Then, after hanging on to random for so long, the designers developed an arrangement strategy that grouped the names.  And once they made that switch, they did an excellent job.

The new arrangement is called “meaningful adjacencies.”  Of course, every arrangement structure, except random, can be termed a meaningful adjacency.  The World Trade Center method is unique among memorials in that it allowed families to select placement.  Names can be located within a group, often an employer, and they can be next to other specified names.

The strategy begins with location.  Names are listed in the footprints of the two towers and placed within their associated tower.  First responders and names from Pennsylvania and the Pentagon are on the south.  Names from the 1993 bombing are on the north.  Those on the planes are listed separately from building occupants.

Within these categories are complex meaningful adjacencies, illustrated by father and son firefighters Joseph Angelini, Sr. and Joseph John Angelini, Jr.  Their names are together on the memorial and, at the same time, grouped within their separate firefighting units.  This is accomplished by placing the two units on consecutive horizontal lines, allowing a vertical adjacency for the father and son.  Surviving firefighters can remember them with their units.  Their families can see the two names together.

Random said these people were miscellaneous.  Visitors would have seen thouands of names, reflecting a massive loss of life but lacking personal context.  With meaningful adjacencies, we see them among their friends.  We see a father and son together.  We know they are loved.  They are loved by families who fought for them so we could share a small piece of their time on earth.