Little Bighorn: A Work in Progress

(Today, June 4, is the birthday of Larry McMurtry.  In addition to novels and screenplays, he wrote a biography of Crazy Horse, who along with Sitting Bull and Gall, led the Lakota warriors at the Little Bighorn.  McMurty also wrote Oh What a Slaughter: Massacres in the American West, 1846-1890, which includes his thoughts about the battle.) 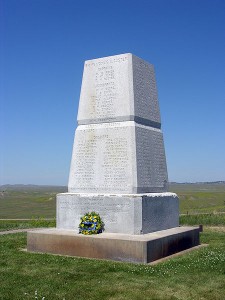 While primarily about the battlefield itself, Greene also discusses the history of the memorial, to the point of listing every town the granite structure visited in its railroad journey from Massachusetts to Montana.  But he says almost nothing about the names on the memorial.  Turns out that access to the railroad itinerary is simple but those names are complex.  I may be the first researcher to attempt an understanding of the arrangement of names on the Little Bighorn obelisk.

It stands above a mass grave of 7th Cavalry soldiers in Custer’s command, listing 263 men who died with Custer or in other areas of the battle commanded by Frederick Benteen and Marcus Reno.  A memorial to the Indians of several tribes who fought against the 7th Cavalry was erected in 2003.  I will be looking at that memorial in the future.

The 7th Cavalry obelisk consists of two sections, one on top of the other, grounded by a two-layered base.  The sections both have four sides listing names in two columns or centered.  Supplied with a list of names on the memorial by Jerry Jasmer of the National Park Service (NPS), and with photos of the memorial and several lists of 7th Cavalry names, I figured out the general idea for the arrangement.

Officers, on the top West side, are centered, grouped by rank and, for the most part, listed by date of military commission, with rank indicated.  First Lieutenants are listed before Second Lieutenants, but both are grouped under the word “Lieutenants.”  It gets more complex with the remaining soldiers.  The memorial also lists scouts and civilians, to be analyzed in a future post.  Custer brought along a newspaper reporter, a civilian brother, and a teen-aged nephew.  He also had another brother and a brother-in-law in his command. 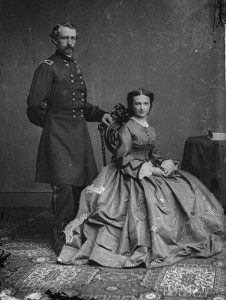 The names of the non-commissioned officers and enlisted men begin on the memorial’s lower West section, arranged by Company, rank and alphabetical order within rank, although only their names appear.  Since the first element of the arrangement is Company, you would think that all members of the same Company appear together.  However they are scattered around the memorial, with each section following the pattern of Company, rank and alphabet.

Companies are contiguous within each section, names reading first in the left column and then in the right column.  Only on the South side do names continue in the same order to the lower section. The West lower section contains a Staff member and Companies A – E.  The two South sections contain a Staff member and Companies A – G, overlapping the West side by Staff and five Companies.  The upper East section has Companies E – I and the lower section, Companies G – L.  The upper North section has Companies I – M and the lower section Companies L & M.  The final name, from Company L, is centered.  Most Companies appear in at least two orderings, the exception being Company D, which lost three men who appear together on the West side.  Companies E, G, I & L have  three orderings, four for L if you count that last centered name.

Fortunately, Jerome Greene footnoted his information about the memorial to History of Custer Battlefield by Don Rickey, Jr.  Rickey footnoted his material to the Elizabeth Bacon Custer archive, which she donated to a museum at the battlefield.  George and Libbie had an especially romantic relationship for the Victorian era.  When he died, she devoted herself to honoring his memory.  She wrote books, gave speeches, and arranged for the erection of large statues.  General Montgomery C. Meigs headed the construction of the memorial, keeping Libbie Custer apprised of his progress.  Her archive contains a list of the memorial names prepared by Meigs.

So I contacted NPS at the monument.  The archive requires preservation and recently moved temporarily from the battlefield in Montana to the Western Archeological and Conservation Center (WACC) in Tucson (!), a couple hours’ drive from my home in Phoenix.  The materials should be available sometime this summer.

However parts of the Elizabeth Bacon Custer collection were microfilmed.  Sharon Small of NPS provided me with copies of memorial construction plans and the list of names that Meigs sent to Libbie Custer, but not his accompanying letter.  The names for the soldiers are in almost perfect order – Company, rank and alphabet.  All Companies are contiguous.

It looks like a printed document, so Meigs probably sent the same list to the stonecutter in Massachusetts.  And then what happened?  Why didn’t the stonecutter follow the list?  That would be easier than dividing up the names with a few here and a few there from each Company.  Did anyone notice the rearranged names during the transportation and construction process?

The answers may sit in Libbie Custer’s archive in Tucson.  WACC is still working on the collection, so a little patience is needed.  In the meantime, I am beginning to research names on the Indian memorial at the Little Bighorn.  After all, they won the battle.