Army version of the Medal of Honor

In a recent television interview, Kyle White displayed the bracelet on his arm, a stainless steel band etched with six names of Americans who died in the Afghanistan battle where he earned the Medal of Honor presented to him in a White House ceremony on May 13.  When I saw the bracelet, it felt like White was carrying a personal memorial, his own private version of the Vietnam Veterans’ Memorial.

On November 9, 2007, Sergeant White’s Army paratrooper unit and a team of Afghani soldiers were ambushed by Taliban near Aranas, Afghanistan.  White was knocked out by an explosion and received multiple shrapnel to his face.  When he came to, he knew he would probably die and since he was going to die anyway, he might as well use his remaining time to help his wounded team members. 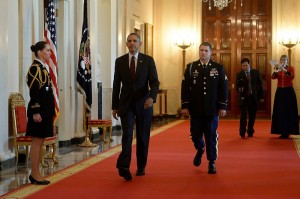 President Obama and Sergeant White walk to the Medal of Honor ceremony.

He first applied a tourniquet to Kain Schilling.  Then he saw the Afghani team’s American trainer, Marine Sergeant Phillip Bocks, severely wounded and in the open.  Under a barrage of bullets, he ran to Bocks four times, finally pulling him to relative safety.  White applied another tourniquet, but Bocks soon died of his injuries.  In the meantime, Schilling was shot again and White applied a third tourniquet, this time using his belt.

He saw their unit leader Lt. Matthew Ferrara in the open.  White ran to save him but the lieutenant had already died.  White then knew he was the one who had to report the attack.  With effort, he found an operational radio on Bocks’ body.  The Taliban blew the receiver out of his hand but he still managed to get it working, repeatedly calling for reinforcements.

Another explosion and White got a second concussion.  Schilling also had a concussion and the two forced themselves to stay conscious.  When the helicopters arrived, White established a landing area and got the wounded on board.  He was the last one out.  Four other Americans died that day with Bocks and Ferrara:  Sean Langevin, Joseph Lancour, Jeffrey Mersmen, and Lester Roque.  Three members of Bocks’ Afghani team also died. 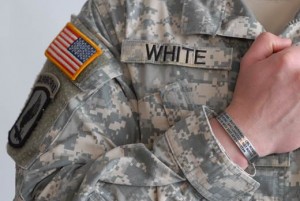 Kain Schilling, who is alive because of White’s actions, presented a bracelet to each of the eight survivors in his unit, including himself, with the names of the six Americans who died that day.  They are listed horizontally on two lines with rank and last name, three names to a line, in order of Army military rank with the Marine sergeant last.  There are two corporals but they are not alphabetical.  The first corporal has fewer letters, so I’m guessing they were arranged for line spacing.  You will need to look at photos of the bracelet for the actual arrangement since news articles list the names in a different order.  The bracelet’s third line gives the unit as 2/503, the 2nd Battalion of the 503rd Infantry Regiment, then the date of the battle and the location as Afghanistan.

White used the GI Bill to get a BA in Business Administration and now works as an investment analyst for a major bank.  He wears the bracelet as a reminder and motivation, “(N)o matter what is going on in my life, like if something is hard . . . you look down and . . . you know, these guys, if they were here right now they would not be complaining.”

That’s the power of the Vietnam Veterans’ Memorial which creates a private space for each surviving veteran of that war.  Names are listed by date of casualty or the day last seen.  All those who died or went missing from one battle are listed together.  Survivors see the names from that battle in one place, with their own faces reflected among the names of their friends in the mirrored black marble.

To get that power, Vietnam Vets must travel to Washington, DC.  But Kyle White, Kain Schilling and the other surviving Americans from the Aranas battle carry their experience in these bracelets.  It’s there for them when they need it.