Names on a Memorial: Into the Earth (Memorials Discovered by the Strategic Information Arrangement Class) 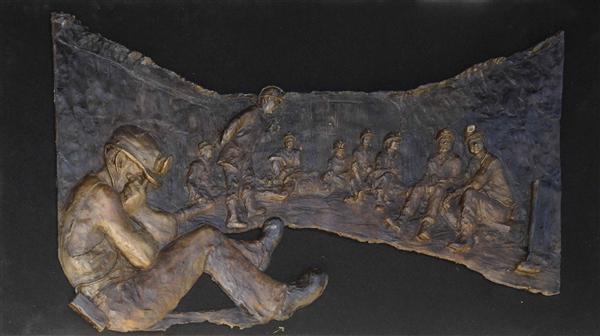 Today is Memorial Day.  On Friday the American military announced its 1000th death in Afghanistan.  Yesterday, British Petroleum announced that it failed in its fourth attempt to stop the massive oil spill in the Gulf of Mexico.

We study name arrangement on memorials during the final week of my online Strategic Information Arrangement class at Simmons College.  That week includes an optional forum question asking class members to describe a memorial neartheir home.

Jared Stern, a Brandeis University pre-school librarian who also works at the Boston Public Library, told us about the New England Holocaust Memorial by Stanley Saitowitz, with Polish extermination camps represented by six columns extending six feet into the earth and 54 feet into the sky.  Smoke rises from “smoldering coals” toward the columns’ glass panels filled with 6,000,000 numbers evoking the tattoos of Holocaust prisoners.

Some panels have quotations instead of numbers.  Jared included one in his remarks:  “At first the bodies were burned, they were buried.  In January 1944, we were forced to dig up the bodies so they could be burned.  When the last mass grave was opened, I recognized my whole family, my mother and sisters and their kids.  They were all in there.  (Motke Zaidt, a Holocaust survivor who was deported from Lithuania and forced to work the death detail in Chelmno.)”

Beth Toren, Web Services Librarian at West Virginia University Libraries discussed two types of memorials for the mine disasters in her state.  An April 5 explosion at the Upper Big Branch Mine killed 29 miners.  The community responded by building spontaneous memorials such as one with pieces of coal painted white with the names of those who died written in black.  It sits on lace on the ground with a cross.

The Sago Mine exploded on January 2, 2006, killing twelve miners; one survived.  This has a formal memorial in Phillippi, although it is not complete.  The photo in this post shows Ross Straight’s flat 4’ x 6’ sculpture, with figures arranged as the bodies were found when rescuers finally reached them.

Beth spoke with the project’s organizer who said the memorial is intended to honor all who died in the mines, but they will only list the names of the twelve who died at Sago.  According to Beth’s paraphrase, “they would never be able to fit all the miners’ names that died in coalmine accidents just in that county on a memorial.”  Today, as oil continues to gush into the Gulf of Mexico, we also remember eleven energy workers who died last month when the Deepwater Horizon drilling platform exploded.

Vermont’s Sharon North Welcome Center on I-89 demonstrates green design with sustainable energy and water facilities.  That’s where Edee Edwards, taxonomy manager at a bio-pharmaceutical services company, found Vermont Vietnam Veterans Memorial.  This first state-sanctioned Vietnam memorial was dedicated two weeks prior to DC’s memorial.  It includes both the names of those who died and of every Vermonter who served.

The memorial also has separate installations for those who died in Iraq and in Afghanistan.  These include not just names, but photos and remarks about their lives.  Since 1983, an all night vigil has been held every Memorial Day.  Edee said that even though she does not feel connected with the war in Vietnam, “this project ended up not just making me think, but making me feel.”

In the 90’s, the Sharon rest stop almost closed, but Vermont’s Vietnam vets lobbied to keep it open.  Ten years ago, the state selected it to be renovated as a green showcase, designed by Timothy D. Smith.  Using ground source heat pumps, the center keeps warm in the cold Vermont winter and cool in the summer, not by extraction, but by sending reclaimed water into 24 wells to return with the earth’s own heat.  Take a look at the worst oil spill in U.S. history.  Instead of stealing her blood, we should let the earth nurture us with geothermal energy.

Names on a Memorial: The Power of Information Arrangement

Today’s post honors Phillip Gibbs and James Green, killed shortly after midnight on May 15, 1970 by police at Jackson State College in Mississippi.  On May 4 of that year, Allison Krause, Jeffrey Miller, Sandra Scheuer, and William Schroeder were killed by the Ohio National Guard at Kent State University.

This post will also be the Memorial Day essay for Discover the Region, where some of my writings will now be published.

Like all language, organized information persuades.  It “directs our thinking,” as biologist Stephen Jay Gould wrote about classification.  Information arrangement shapes perception and interaction.  Names on memorials are examples of organized information where arrangement defines a visitor’s experience.  The thoughtful chronology of the Vietnam Veterans Memorial builds a space for individual remembrance.  A World War I memorial does the same, but with a different arrangement strategy, reflecting the difference in the two wars.  In contrast, the random arrangement proposed for the World Trade Center memorial almost derailed the project.  Yet, in another context, random builds community at the Memorial Temples of Burning Man.

By listing names on the Vietnam Veterans Memorial (VVM) in chronological order, designer Maya Lin gave surviving Vietnam Vets personal spaces for contemplation, spaces that make the VVM our most powerful memorial.  Names are arranged by date of casualty, not date of death.  Those who died later of wounds received in battle are listed on the day of the battle along with their buddies who died that day or went missing.  When a surviving soldier visits the VVM, he need only remember one name to look up in the index.  He finds the panel and sees the names of his friends who died in a battle he fought.  They remain together where he can visit them and remember his own experience.

Architect EdwinLutyens influenced Lin with his World War I Memorial to the Missing of the Somme.  This open structure of 16 huge columns, with intersecting arches and a truncated tower in Thiepval, France lists more than 72,000 names on its huge columns, names of British soldiers missing from a single battle.  Like the VVM, the memorial gives survivors an individual place of remembrance, but the two use different arrangements to achieve the same goal.  The VVM honors over 58,000 dead or missing during a 20 year war.  The Somme memorial lists those missing from a five month battle, most from a one day massacre when British troops surged into waiting German lines.

In World War I, Britain recruited Pals Battalions.  Men who signed up together could serve the entire war with their buddies.  Cities and towns mustered their own fighting units, sending them off to France with names like the Sheffield City Battalion.  On July 1, 1916, many of these towns lost nearly a generation of young men.

The names on the Somme memorial are arranged by British Army Order of Precedence.  That’s how military units appear on the parade ground.  These units came from individual towns, so the arrangement has the effect of organizing missing soldiers by their home towns.  Even today, with only a few remaining World War I vets, relatives and neighbors have their own place of remembrance.

Michael Arad, designer of New York’s National September 11 Memorial, ignored individual places of remembrance when he selected random as the arrangement.  This would have dispersed names from each company all over the monument.  Instead of a personal place to remember fallen coworkers, survivors would have had to hike to see each name.  The arrangement infuriated surviving families and they eventually refused to contribute to the memorial fund.  At that point, the design committee reconsidered and offered “meaningful adjacencies.”  Families can now place their loved one’s name within a group or next to an individual.  Many names will appear with the companies they worked for, but they might also be with special friends.  In one case, a married couple who worked at different companies will now be forever together on the memorial.

The designers of the National September 11 Memorial paid dearly for an arrangement error, losing money, prestige and the community’s good will.  They went from simplistic random to perhaps the most complex arrangement on any memorial with individualized name placement and multiple types of groupings.  If the designers had originally selected an obvious arrangement, such as geographic by floor, survivors would have had their places of remembrance.  They would not have needed strong family associations to fight against the arrangement and ultimately to fight for a more detailed names design.

In the right context, however, even random can build private spaces of remembrance.  David Best did this at Nevada’s Burning Man art festivals.  His Memorial Temples in 2001, 2002, 2003, and 2004 reflect the Somme memorial as arched open structures, topped with a tower and filled with names.  Burners inscribe the names they want to remember anywhere on the memorial.  The effect is random, but each inscription describes a private remembrance.  For the week of the festival, Burners have a personal place to grieve, a place they have chosen.  When the Temple burns on Sunday, individual memories and the combined memories of all Burners float into the evening sky.