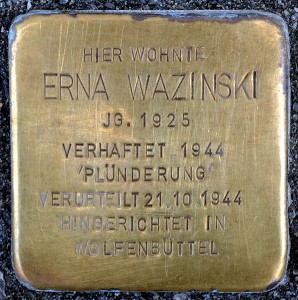 Today is the 95th anniversary of the World War I armistice, when the war ended at the 11th hour of the 11th day of the 11th month.  The night of last Saturday and Sunday was the 75th anniversary of Kristallnacht, a pogrom that moved German Jews from the loss of civil rights into a nightmare of torture and murder.  Both concepts, honoring the war dead and remembering the Holocaust, are featured in Stolpersteine an art project by Gunter Demnig, who transforms all of Europe into a war memorial.

Stolpersteine is the German word for “stumbling blocks.”  The blocks are small brass cobblestones installed into sidewalks near locations of Holocaust events, primarily homes where victims once lived.  They are small, about 4 inches square, one per person.  While there are variations due to individual circumstances, the stones primarily give name, date of birth, deportation, and the fate of the person being honored.  Demnig also makes “stumbling thresholds,” Stolperschwellen, for areas with too many names, such as a mental institution in Trier from which 542 patients were taken and murdered.  These can be as large as 1 square meter.

The typical cobblestone is sponsored for a fee of €120.  Demnig’s instructions tell sponsors how to interact with municipal authorities and who to inform, including family members and neighbors.  Demnig personally installs each of the stones, a full time job.  He can also give a talk about the project for an additional €200 plus expenses, a remarkably reasonable fee for someone of his stature. 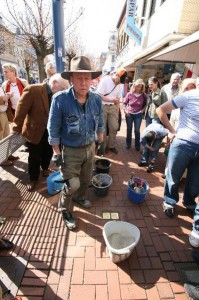 By December 2013, the project expects to have installed 43,500 stones in 1000 locations.  This is up 3,500 stones from the April 2013 count, also at 1000 locations.  It looks like once a municipality agrees, the stones continue to be laid throughout the area.  Today, Armistice Day, Demnig is placing stones at several sites in the Berlin area.  Tomorrow, 11/12/13, he will be in Stuttgart.  In 2014, he is tentatively scheduled through May for 136 installations and 8 speaking engagements.  There is a six month waiting list for installations.

When I first heard of this, I immediately had negative thoughts about people walking on these sacred names.  But you have to look beyond that.  Of course, there is a logistical issue.  Plaques on the sides of houses require negotiations with current owners, while a project of brass cobblestones in the sidewalk can be approved once by the municipality or the approval process streamlined by regulations.  But more than that, the cobblestones are placed where these people lived.  They are on the sidewalks in front of their homes.  When we walk in their neighborhoods, even if we tread on named cobblestones, we walk where they walked.  We share a moment in their lives before insanity grabbed them away from us. 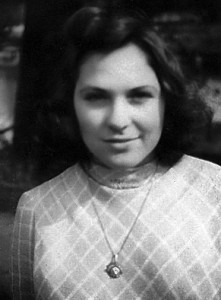 This past week we had news about 1400 artworks discovered in the Munich apartment of Cornelius Gurlitt, son of Nazi art dealer Hildebrand Gurlitt and his wife Helene Hanke, a dancer who worked with German modern dancer Mary Wigman.  An additional 22 works were then voluntarily disclosed by Hildebrand’s brother-in-law.  So we’ll take as our example the cobblestone of Erna Wazinski, a 19 year-old non-Jewish German who lived in Brunswick.  The town was bombed in 1944.  Erna went to her bombed home trying to find her mother and to collect what was left of their belongings.  A neighbor denounced her as a looter and she was guillotined by the Nazis for having a couple of suitcases filled with stuff she thought she owned.  In 1986, German author Adam Seide wrote a novel about her, Die braunschweigische Johanna: ein deutsches Requiem (The Brunswick Johanna: A German Requiem).

Let’s compare Erna and her two suitcases with the Nazi pillaging of Europe.  Nazis conceived of World War II as not just a military war but a cultural offensive.  Hitler, an artist himself, first went after valuable objects, looting entire countries of their museums and private collections.  Then they started taking everything else.  In Paris, Nazis went door to door.  If a home was not occupied they helped themselves to its contents, with no concern for value.  In The Rape of Europa, Lynn H. Nicholas provides a list of loot from one apartment, “5 ladies’ nightgowns, 2 children’s coats, 1 platter, 2 liqueur glasses, 1 man’s coat. . . .” (p. 139).  The Nazis transported boxcars and trainloads of other people’s stuff across Europe, using massive resources that were therefore not available for the actual shooting war.

Erna’s translated Stolperstein reads “Here lived / Erna Wazinski / Born in 1925 / Arrested in 1944 / Looting / Convicted 21.10.1944 / Executed in / Wolfenbüttel.”  Germany has 60% of the cobblestones.  The rest are scattered all over Europe in Austria, Croatia, the Czech Republic, France, Hungary, Italy, Luxemburg, the Netherlands, Norway, Poland, Russia, Slovakia, Slovenia, and the Ukraine.  In Stolpersteine, all of Europe is a location-based memorial.

Smaller location-based installations include the Oklahoma City National Memorial, which places an empty chair at the site where a body was found, with a litttle chair to indicate a child.  The World Trade Center’s National September 11 Memorial is primarily location-based.  Within the footprints of the two structures, names are included with their associated building.  In addition, family members suggested placement of their loved one’s name, which, for the most part, was among their co-workers.  Since companies were housed in different offices, this essentially creates a location-based arrangement, although actual placement has a lot to do with the puzzle of fitting name groups into the available space.  The Memorial to the Missing of the Somme in France also has elements of a location structure.  Because of Britain’s World War I recruiting strategy, a strict adherence to military order of precedence places soldiers from the same town together.

Today, Armistice Day 2013, Gunter Demnig installed stones at Weißensee and Charlottenburg in the Berlin area.   Weißensee is the site of one of the largest Jewish cemeteries in Europe, which brings up an argument against his project.  The cobblestones remind some of the broken Jewish gravestones that were used for paving.  In response, Demnig quotes a passage from the Talmud, a passage illuminating this entire “Names on a Memorial” series, “A man is not forgotten until his name is forgotten.” 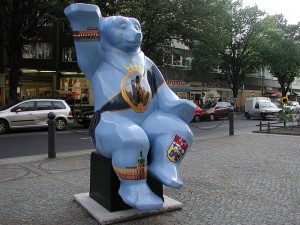 In addition to the Stolpersteine, Charlottenburg participates in another international public art project, the United Buddy Bears.  These are life size decorated statues of smiling bears representing peace and happiness.  The project was conceived by a German couple, Eva and Klaus Hurlitz, with sculptor Roman Strobl.  The bears are installed individually or as part of a travelling exhibition, the Circle of United Buddy Bears, with alphabetized bears representing each nation.  Typical bears have upraised arms, allowing them to stand hand-in-hand together.  At the end of each tour, the bears are sold with proceeds donated to UNICEF.

Buddy Bears in Kuala Lumpur, 2012
(click on the photo for a closer view)

Cartoony smiling bears might seem trivial compared to evil of such dimension as the Holocaust.  But Eva Hurlitz has created a compelling ethic around her bears including the golden rule, tolerance, and respect for others.  This message, delivered by a painted bear, can especially resonate with children, who will have to navigate the international snares of an ever-shrinking world.  As Eva said in her joyous writings about peace and tolerance, the Buddy Bears help us “understand one another better, trust each other more, and live together more peacefully.”

(In the spirit of Buddy Bears, and in remembrance of the Holocaust, I would like to suggest donations to a charity helping the Philippine victims of Typhoon Haiyan.  A final death toll has not been released but it looks like 10,000 were killed in Tacloban, the capitol of Leyte Province.  ShelterBox provides a large box of life’s equipment, including a tent that sleeps 10.  I support this charity because it simply provides a basic human need.  For people who suddenly have to live outside, perhaps mourning family members, the privacy of a tent can make a big difference in the ability to cope.)