(Today is the birthday of the Dalai Lama, a survivor of religious persecution.  So we honor the shrines of Timbuktu, recently demolished by religious vandals who think God wants them to destroy beauty.) 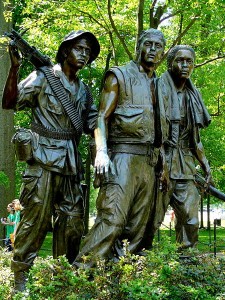 Burton Barr Central Library sits a mile or so from my house.  Named for a Phoenix politician who supported the library, this main branch still has a few microfilm readers.  That’s where I’ve settled in, immersed in the early days of the Vietnam Veterans Memorial (VVM) as documented by the Washington Post and just about every art critic in 1980’s America.

The announcement of Maya Lin’s winning design erupted into a battle between the forces of representational and non-representational art, causing the addition of an Iron Mike, the typical soldier statue erected in a town park.  Twelve years after the VVM established itself as one of the world’s great memorials, best-selling author Tom Wolfe, a representational combatant, illogically lamented the 1980’s “ludicrous lapse of taste,” while boasting of “the throngs who came annually to see” Three Soldiers.  Frederick Hart’s statue, of course, benefits from its proximity to Lin’s VVM.

While I respect Lin’s fight for artistic integrity, I like Three Soldiers, handsome guys in the tradition of World War II movies, a good war when President Roosevelt’s four sons all served in the military.  The statue solved another controversy.  War memorials cannot be neutral because neutrality is defined as anti-war.  Wars require promotion, PR skills honed with millenniums of practice and contradicted by the reality of a list of names. 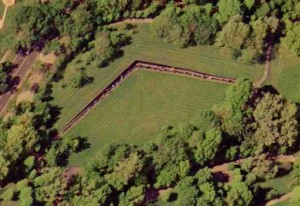 A complaint against Lin’s concept was the lack of Vietnam vets on the selection committee.  But that’s why they got this exceptional memorial.  As a consultant, I know fresh viewpoints build innovation.  Instead of learning about the Vietnam War, Lin studied other memorials with names.  She built a space to heal sorrow.  The descent into the earth and the V-shaped design, with names beginning and ending at the central vertex, all interact with the phallic Washington Monument to bring us into the comforting arms of the feminine.  The VVM is about those who died, but it was built for those who survived and for them, it’s a coming home.

* In matters of taste, there can be no disputes.